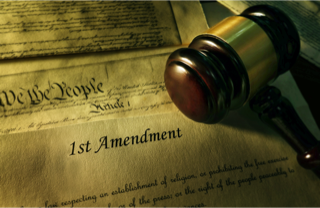 So much of the cannabis movement centers around the protections of the First Amendment to the United States Constitution. Freedom of speech, freedom of assembly, the to be left alone, and the right to privacy are all rigorously tested in the face of cannabis use, production, and research. The country's top First Amendment lawyers have been on the frontlines of cannabis-related litigation for decades. David has been working and fighting for decades as a first amendment lawyer in the state of New York, ensuring constitutional rights are being upheld and not been broken or violated.

David has broad First Amendment litigation experience. As an experienced First Amendment lawyer, he has sued Facebook and the New York Times over First Amendment issues.  He has represented High Times magazine in a variety of contexts, including federal grand jury subpoenas seeking subscriber lists in the height of the prohibition era not all that long ago. David successfully defended and dismissed the case brought against Lev Parnas in a high-profile defamation lawsuit filed by the former Chief of Staff to Congressman Devin Nunez.

David was the  Legal Adviser in charge of more than a dozen cannabis festivals where cannabis was freely and safely celebrated by attendees as part of the freedom of assembly and freedom of speech that have been at the heart of the cannabis legalization movement. He negotiated venue and other contracts, obtained proper permits, worked cooperatively with police and fire squads on public health concerns, and engaged industry stakeholders in promoting the world-famous Cannabis Cup events in Amsterdam, Colorado, California, and Michigan.